Sean Conlon of 'The Deed' on His Worst Flippers Yet: 'I'm Crazy Frustrated!' 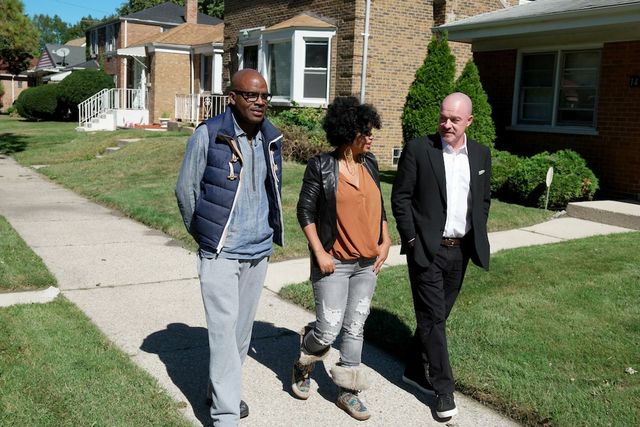 Not everyone is cut out to flip houses, not even with the help of real estate guru Sean Conlon of "The Deed: Chicago."

As proof, the fourth (and last) installment of this CNBC series, "Playing Defense on the Deed," shows Conlon striking out with his latest protégés, Kai Bandele and Bernette Braden.

At first glance, this couple's goals seem simple enough: Bandele and Braden have made a decent living remodeling houses in Riverdale, which they then rent out. But they want to try making a bigger, faster profit with a flip. They even have what appears to be the perfect house: a four-bedroom fixer-upper they'd bought for $27,000. They also have a buyer under contract who has offered $105,000 for the place once it's fixed up.

There's just one problem: The couple need $47,000 to renovate. That's where Conlon comes in. He says he'll give them a $47,000 construction loan at 12%, but wants 20% of the profit. Braden negotiates him down to 15% and say they'll finish the project in six weeks.

So far, so good. But it doesn't take long for this deal to head south. Here are the lessons Conlon tries to drive home.

Lesson No. 1: Remodeling for a rental is different from a flip

Conlon explains that remodeling a rental property is a long-term investment. So if the renovation takes longer or costs more, it's not a big deal, because you can make the money up over time.

But "a flip is a short-term investment, and time is not your friend," he explains. "The longer you take, the more it costs." He's referring to finance fees and cost overages, which take a big bite out of your profits.

Lesson No. 2: Don't get bossed around by a buyer

The buyer Bandele and Braden have under contract has become very involved with the renovation, and is asking for all sorts of custom work.

"Having a guaranteed buyer is great," says Conlon. "As long as he understands he's buying the house you're renovating." Not designing the house to his particular tastes.

The reason that route doesn't work? "If they back out of the sale, you're stuck with a home you've personalized for them, and that's much harder to sell," Conlon says.

Lesson No. 3: Hire an assistant

Soon enough, this renovation project is behind schedule, partly because Braden is spending all his time doing menial chores to manage their rentals rather than overseeing work on the flip. Conlon advises him to pay someone else to cut the grass and fix the leaky faucets, so he'll be free to focus on the flip (and the larger profit potential).

Lesson No. 4: Stay on top of your general contractor

When the project gets even further behind schedule, Bandele and Braden blame the contractor, admitting that he works only about three hours a day.

"You need to be firm and stop being so nice," Conlon tells them. They fire the contractor, and hire another to complete the job.

Lesson No. 5: Meet your own obligations, too

As if a slacker contractor weren't bad enough, Bandele is consistently late to their meetings and blows off one powwow entirely. Then, for the icing on the cake, the couple dodge Conlon's calls for a whole month!

Conlon is typically a cool cucumber, but this is too much.

"I'm crazy frustrated," he says. "They have been one disappointment after another."

The couple admit they have a few habits they need to break.

How does it end?

They eventually complete this six-week project in 14 weeks, and just as Conlon feared, all their delays killed the sale because the buyer lost his financing.

The good news? By the time this episode airs, the house is under contract for $127,800. It sounds great, but no details are given about the profits, so you could assume that much of it went toward finance fees and the additional costs incurred by lackadaisical management.

In the end, Conlon's assessment is a big thumbs-down.

"They should stick to the rental business," he says.

You can catch full episodes of "The Deed: Chicago" On Demand or on CNBC.com.